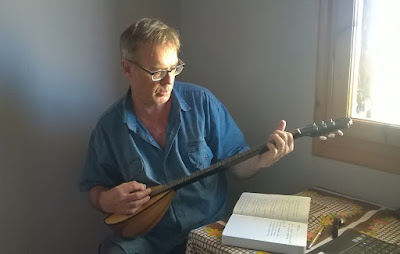 Author, playwright and musician Paul David Adkin plays his «tzoura» at Three Rock Apartment an afternoon of July 2016.
Every year the first prize winner of eyelands’ international short story contest wins a week holiday at Three Rock.
The contest runs from March 20th through June 20th, 2016
The theme of the contest this year was «Colours». The first three winners will see their stories published in two different anthologies (Greek and English). All the stories of the Short List will be published in a special English edition, released through amazon.com & strangedays books.
Winners and the short list to be announced on September 10th, 2016.
Eyelands short story contest is the one and only international short story contest based in Greece.
Paul Adkin was the first winner of the contest in 2012 but he loves Crete and likes the place and spent some days as an honorary guest also in 2014 and in 2016. His novel «When Sirens call» will be released in Greece this year from Strange Days Books.